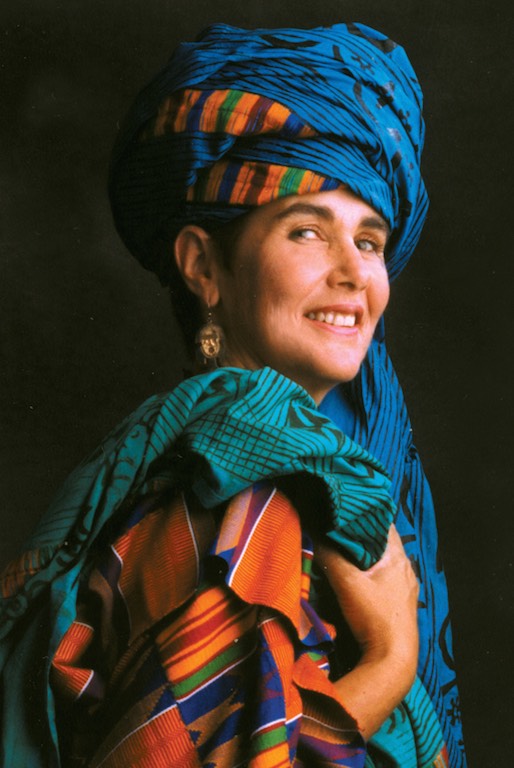 Sharon Katz was born in Port Elizabeth, now known as Nelson Mandela Bay, South Africa. As a young teenager during the terrible apartheid era, she used to sneak out to the “Blacks Only” townships by hiding under blankets in the back seat of her friend’s car. There, she met with the now-famous actors in Athol Fugard’s group, including John Kani of “Black Panther” fame, and began her lifelong mission of using music to help break down the country’s artificially-imposed racial barriers.

After getting professional training and a Master’s degree in Music Therapy in the USA, Sharon was ready to return home to South Africa and use her skills as a guitarist, singer, band leader, composer, producer, and music therapist. As soon as Nelson Mandela was released from his 27 years of imprisonment by the Apartheid government, she went to work trying to help her country heal from the wounds of Apartheid.

Together with her Zulu singing partner, Nonhlanhla Wanda, they formed South Africa’s first, 500-voice multiracial and multicultural youth choir in 1992, traveling out to all the still-separated communities to rehearse and start building trust across the Apartheid-imposed barriers.

As the election date came closer and the ethnic battles intensified, they hired a train, The Peace Train, and toured the country with their band and choir. Living together in mixed-race compartments and performing together at each stop along their route, they became a moving billboard for Mandela’s message of peaceful coexistence and the transition to a nonracial democracy.

After Mandela’s election, Sharon Katz & The Peace Train performed at all his special events and became the country’s first musical ambassadors of the new democracy.  During their initial 5-week tour in the USA, they showcased South African music and unity across the country including at the New Orleans Jazz & Heritage Festival, Harlem, Duke Ellington Center for the Performing Arts, Disney World, and many universities.

In 2015, the documentary film “When Voices Meet” about Sharon’s music and humanitarian work with The Peace Train project was released. Through archival footage and the 20-year retrospective words of the original choir members, musicians, and other South African personalities, this critically acclaimed documentary went on to receive numerous awards at the over 30 film festivals around the world.  It has been shown on TV over 50 countries and is now available on Amazon Prime and DVD. You can see the trailer at https://sharonkatz.com/when-voices-meet/

Sharon continues to perform worldwide as Sharon Katz & The Peace Train and has formed bands in South Africa, Ghana, USA, Cuba and Mexico. After a 2019 cultural collaboration with Promotora de las Bellas Artes and its Cuban artistic director, Sharon established a base in Tijuana, Mexico where she is currently working on an international collaboration that will tour in Mexico, Cuba, and South Africa.

Sharon Katz & The Peace Train use proceeds from their appearances and music sales for their humanitarian work in under-developed areas of South Africa, the border region,  and around the world including music therapy with orphans and communities affected by HIV/AIDS, poverty and violence; food security programs in impoverished areas; conflict resolution in violence-torn regions; schools and community arts programs; and in programs for asylum seekers, migrants, survivors of torture, and youth rescued from trafficking rings.

The first time world-wide audiences saw Sharon perform was on CNN in April 1994. By then, a date had been set for South Africa’s first-ever democratic election. Sharon was commissioned by the Independent Electoral Commission to write songs in many of South Africa’s languages to teach people how to vote for the first time in their lives. CNN caught Sharon jumping down from a helicopter to perform the songs in a remote area of KwaZulu-Natal because Chief Buthelezi had just agreed to let his people vote and there was an urgent need to inform people quickly.

The CNN piece brought international attention, and the invitations to perform in the US and elsewhere started pouring in. The Peace Train was about to become The Peace Plane!

As South Africa’s “Cultural Ambassadors,” Sharon Katz & The Peace Train took flight in 1995 to spread their music and message to the US. With sponsorship from the government and private sector in both South Africa and America, Sharon responded to the US invitations by taking her 45-member performing group on a 5-week, 8-city US tour. 100,000 fans screamed for more at the New Orleans Jazz & Heritage Festival, just one of their stops. They were an instant hit, selling out all their CD’s at the first concert.

From Disney World’s International Festival to the New Orleans Jazz Fest, from Harlem to Hampton, Memphis and Cincinnati, and from Philadelphia’s Penn’s Landing to Washington, DC’s Duke Ellington School of Performing Arts, Sharon Katz & The Peace Train thrilled audiences of all ages with the unstoppable beat and amazing harmonies of South African music and dance.

Sting and Trudie Styler heard about them from one of Paul Simon’s producers, and soon Sharon Katz & The Peace Train were whisked into the studio to record for an album that included Sting, Paul Simon, Tina Turner, Elton John and Madonna. Sharon Katz & The Peace Train had just returned from a performance at the National Theatre of Ghana — part of their “Cape to Cairo Peace Train Tour” — when the phone rang from London. Marc Silag, a production supervisor for Paul Simon, was working on a recording project for Sting and Trudie and they wanted Sharon Katz & The Peace Train in the recording studio in 3 days. Without even time to unpack from Ghana, the group was whisked into the studio for a recording and video session. The resulting album is called “Carnival” and Sharon Katz & The Peace Train had really hit the big time! Nelson Mandela’s “Cultural Ambassadors” began touring the world, treating Presidents, Kings and millions of fans on 3 continents to the unstoppable beat of their music. Back home in South Africa, Sharon was using her music therapy techniques to help heal the nation from the wounds of apartheid. She’s also been working in other trouble spots around the world, earning her a reputation for converting “gang members into band members.” With violence, intolerance and problems in schools becoming a daily concern in America too, Sharon has established a base in the U.S. She’s doing workshops and concerts in schools, universities and community centers across the country. She’s also forming Peace Train projects in many cities.

In another landmark event, Sharon composed and directed “Crossing Rhythms,” a music and dance extravaganza that featured over 200 performers from across the African continent and had South Africa’s Philharmonic Orchestra playing African music for the first time in its history.

Sharon performed with the legendary South African singer Miriam Makeba when she was finally allowed to return home; toured and recorded with Miriam’s colleagues, Dolly Rathebe and Abigail Kubeka, in South Africa and the USA; performed with Pete Seeger who was a big supporter of her work in South Africa; and featured on Sting’s Carnival! album with Elton John, Tina Turner, Annie Lennox, Ruben Blades, and Pavarotti.  Grammy award winners Ladysmith Black Mambazo also joined Sharon on The Peace Train. Several of Sharon’s albums have featured on the Grammy ballot for Best World Music including Imbizo, Side-By-Side and We Can Be The Change. 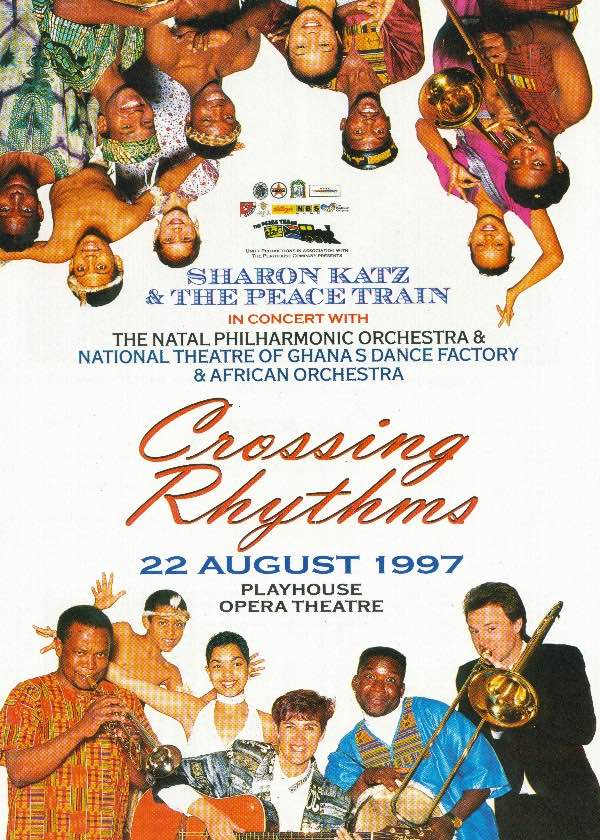 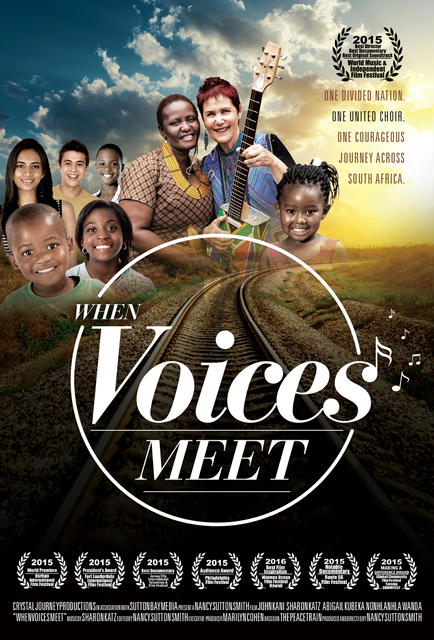 In 2013, we celebrated the 20th anniversary of The Peace Train’s original ride through South Africa to help Nelson Mandela break down the barriers that apartheid had created and to usher in the country’s first democratic election. To mark the occasion, the documentary “When Voices Meet” was released and premiered at the Durban International Film Festival in South Africa with simultaneous broadcasts throughout the continent of Africa.  “When Voices Meet” has been selected by over 25 film festivals around the world and has won numerous awards including Best Documentary, Best Original Soundtrack, Best Director, Audience Award and President’s Award. Screenings of “When Voices Meet” prompted requests for The Peace Train to develop projects in other parts of the world.

Since 2015, our efforts have focused on bringing together diverse groups and tackling important social justice issues in the USA and Latin America. Under the banner of “Transcending Barriers,” we have worked with local partners to develop initiatives between urban and rural communities; across racial, economic and religious divides; and with established communities and new immigrants.

Since 2018, Sharon’s groundbreaking project “The Peace Train Transcending Barriers” has brought together community members, families, musicians and singers from the USA, Mexico, Cuba and South Africa in her continuing efforts to breakdown stereotypes, promote greater understanding and respect, and address social justice issues.  In partnership with the Tijuana-based organization, Promotora de las Bellas Artes, Sharon has been working with hundreds of youth in Tijuana’s most vulnerable areas as well as in shelters for migrants and safe houses for youth who have been rescued from trafficking rings.